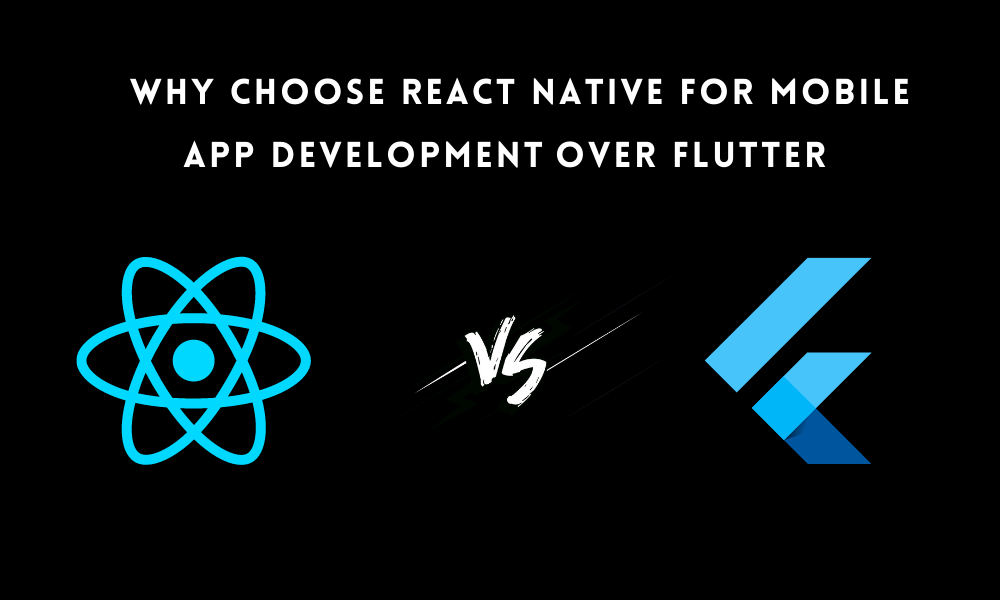 Flutter and React Native are the most popular frameworks used for mobile app development. Their popularity keeps on rising. Both of them are cross-platform frameworks. So, many developers wonder which framework to choose, Flutter or React Native. They are not able to decide which is better but most experts believe React Native is a better option. They recommend FReact Native over Flutter. Do you want to know why? Let’s dig in.

What is React Native – A brief Intro

It is an open-source mobile app framework that functions with the programming languages JavaScript and React.js. React Native was created by Facebook. It is mainly used for mobile app development because it is a cross-platform framework. However, it is not only meant for mobile apps but also for web applications.

What is flutter – A brief intro

A comparison table of React Native and Flutter

There are many similarities between React Native and Flutter. Moreover, both frameworks have many pros. However, React Native is more preferred because of a few of its clear advantages. What are they? Go ahead to know the answer.

Why React Native app development is better – A detailed analysis

Before analyzing the differences, you should first know the similarities.

You can install React Native easily with a one-line command. If you have npm and Node.js installed already, React Native can be installed in a jiffy but installing Flutter is a little complicated because there are more steps involved. First, you have to download it from the official site. Then you have to unpack the archive. The next step is to add the folder manually to the path. This is a little time-consuming. Hence setting up React Native is faster and easier than Flutter.

React Native uses native compounds that are ready to use. So the development process is comparatively fast. The time taken for development is significantly decreased. Moreover, it is more relevant and more efficient. It is true that Flutter also has useful widgets that are adaptable to many platforms. But the problem is it is relatively new. So, most of the widgets have to be manipulated and customized.

React Native mobile app development is known as JavaScript Native. On the other hand Flutter, mobile apps are cross-compiled apps. Flutter is newer when compared to React Native. So, most app developers are not comfortable with its architecture. Of course, Flutter provides many architectural patterns but it may take some time for the developers to understand it fully.

It is an important requirement for developers because it solves a lot of problems for them. React Native was first released in 2015. Since then, the community has grown significantly. It is popular not only among experienced developers but also among newbies. So, it is community base is more extensive and it is also ready to assist whenever necessary. Meanwhile, Flutter also has good community support but it still has to gain more momentum.

When you compare React Native vs Flutter the design capability and flexibility of React Native is better. Flutter is a tool kit that has an extensive library of components. It also has several ready-to-use widgets. React Native has fewer widgets as it is a library and not a tool kit. However, Flutter relies upon the principles of Google Material Design. So the chances of errors are more in Flutter. React Native is better if the original design is your priority.

Flutter and React Native have hot reloading features. This helps in saving a lot of time in testing the changes in UI. However, React Native has a slight advantage because Javascript is a commonly used programming language. So developers can use any text editor of their liking. There are many text editors to choose from. Meanwhile, this is not possible with Flutter because Dart is not frequently used and so the choice of text editors is limited.

React Native and Flutter are great choices for mobile app development but React Native has an edge over Flutter. It is the fastest way to build mobile apps. So in conclusion React Native is a better choice when compared to Flutter. Its ‘Learn once, write anywhere’ principle is very helpful to the developers. Furthermore, there are plenty of libraries and tutorials to help you. You can reuse the codes easily. Moreover, there are many big and successful companies using React Native. Therefore, it is definitely a better choice.

TOP iPHONE APPLICATION DEVELOPMENT TRENDS TO WATCH OUT IN 2021

You may have missed

QR Code Digital Menu For Restaurant For Safe Dining In 2022